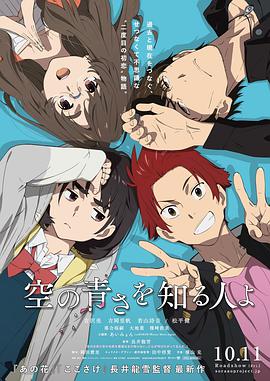 When Aoi was very young

Her mother passed away

And her only relative, Xi, was still in high school

Xi's boyfriend, Xiaochuan, is a guitarist

He formed a band by himself

They would rehearse every day in the temple hall

Xi took Aoi to watch the rehearsals every day

But soon after that

She was about to graduate

Ogawa wanted to go to Tokyo to pursue his musical dream

He wanted to bring Sister Xi with him

But Sister Xi has to take care of her sister

And refused her boyfriend

Ogawa was a bit excited

He grabbed her by the shoulders

Aoi, who was eavesdropping from the side, rushed out

She slapped Xiaochuan's thigh with all her strength

Told Ogawa not to bully her sister

Aoi wants to be with her sister forever

Sister Xi and Xiaochuan broke up

Aoi was already a high school student about to graduate

Her teacher asked her about her future plans.

She also said she wanted to pursue her dream in Tokyo

At the end of school

Sister Xi came to pick her up

But the relationship between the two sisters

Because Aoi hates it when the neighbors keep telling her

that she should be grateful to Xi

Now she is getting to know her own way

She feels that she is the shackle of Xi's sister

Locking her firmly in this small place

Moreover, after Xi broke up with Xiaochuan

She never looked for a boyfriend again

She is still single

When Aoi was practicing the piano

Aoi would think of what Xiaochuan had told her

Both of them are people with moles on their eyes

So they would definitely become "shining stars"

The drummer in the band at that time, "Lao Dao"

Now he works with Xi

She told her to be careful

She said there was nothing going on between them

Aoi was a bit disturbed

She ran to the temple to practice

She plucked the strings hard

He shouted that he was making a lot of noise

Seeing the person in front of her

She ran away in fear

Xiaochuan tried to chase after her

But found a wall of air in the temple

She asked Xi if she had contacted Xiaochuan

Sister Xi said she had not contacted him since the breakup

At that moment, Lao Dao came to the house

He said that the singer he had invited had arrived early

He asked Xi and Aoi to help pull the banner

The master showed up on a freight car

He was joined by Xiaochuan, whom he hadn't seen in years

Xi was a bit shocked

She took her son to the temple

The high school-looking Ogawa was still in the temple

They suspected that this Ogawa was because of lingering

And the creature was created

Ogawasuke had too much to drink

She took him back to the hotel.

Sister Xi was embraced by Ogawasuke

She threw Ogawasuke to the ground with an over-the-shoulder slam.

The bright and cheerful boy back then

How did he become such a scum?

The sisters, each with their own problems

Ogawa ate it with great satisfaction

But Aoi was preoccupied.

She asks why the strings of Ogawa's guitar are rusted out.

There was a problem with the performer's show

The bassist and drummer were hospitalized because of indiscriminate eating

And the singer refused to use the recording

We have a bassist and a drummer

The singer was very happy

He took the suggestion

He didn't want to play with amateurs

Aoi was not convinced

Back then, you said I was a shining star

Ogawasuke was not convinced either

But Aoi and Lao Dao's performance was recognized by everyone

At night, when they returned to the temple

At that moment, Xi came over

She came to apologize to Aoi

Luckily, Xiaochuan climbed up to the roof

so that Xi didn't see her

She said that Xi had become an old woman.

She's even cuter than models and photo idols.

Have I improved my guitar skills now?

Aoi was afraid that the 18 year old Ogawa would know

She didn't dare to tell Ogawa

The next day at the ensemble rehearsal

He said that Aoi's rhythm was all messed up

A group of women came in

They greeted Ogawasuke with enthusiasm

Ogawa in the temple saw the video

He was very angry with his present self

To make Aoi prove to his present self

He decided to coach Aoi himself

The next day in the evening

Ogawasuke came out for a walk

He saw a high school band

At that moment, Aoi's classmate who had always admired Ogawasuke

The classmates all spread the news that the classmate was dating an older man.

He said he wouldn't do it to his friend's man

Aoi was so angry

She fell on her knees and hid her face and cried

She went home at night

She said that if Aoi and Ogawa had left back then

After that, she turned and ran out of the house

Sister Xi didn't catch up with her

But Aoi was not here

He stole a rice ball

Sister Xi sat for a while and left

It's true that Xiao Xi only makes her sister's favorite food

Xiaochuan understood that he had a crush on Aoi

It wasn't a boyfriend/girlfriend kind of love

The person he likes is always Xi

But he didn't do anything to himself

Sister Xi heard the sound of guitar outside

He was a bit scared when he saw her.

She asked him to play "The Man Who Knew the Blue of the Sky".

It was the only single he had released since his debut.

He thought it was a black history.

She stood by and watched.

Ogawasuke became the same as before

He would deliberately sing with his voice

To make her happy

Aoi, who was passing by, saw this scene

She also recalled 13 years ago

Ogawasuke said that he was most comfortable with Sister Xi

He wanted to stay here with Sister Xi.

Along with the tears

There was also a light rain that fell quietly

When she returned home

She thought back to

Ever since her parents died

She hadn't seen Xi cry since her parents died

She wanted to look for medicine in the cupboard

But she found a notebook called "Tips

Inside were various recipes

And how to sew a school bag for Aoi

The perfect sister in her eyes

It was all because she wanted to take care of her

Tears fell on her notebook

Aoi ran to the temple

But for the sake of her sister

She decided to send the current Xiaochuan away

The countdown to the show was on

But the singer lost his necklace.

He said it was his source of strength.

He can't sing without it

The crowd looked through the singer's tourist photos

The necklace had fallen into a cave in the mountain

Xi volunteered to look for it

Aoi was worried and went after her

But she didn't go with her sister

Ogawasuke took advantage of the break

He saw his 18-year-old self

And Xi had just entered the cave

There was an earthquake

There was a landslide on the mountain.

Aoi rushed to the temple

She told Xiaochuan the news

Both Ogawa were very anxious

But Ogawasuke quickly calmed down

He didn't even have the courage to take a step forward

He said that the reason he was here

Because he didn't want to be without Xi in the future

So he was trapped here

But now he understands

At that time, he had the courage to move forward

So he had to leave the temple

He hit the air wall hard

As Ogawa pushed harder and harder

The strings on the old guitar began to tremble

He pulled Aoi up in a hurry

He rushed to the mountain where Sister Xi died

Ogawasuke was inspired by his younger self

He also ran there

Ogawa took Aoi and jumped over the village bridge

Under the blue sky, he kept going up to the mountain.

Ogawasuke also took a taxi to get there

But he was too late.

He had already met Sister Xi in the cave.

Ogawa told Sister Xi that he had tasted her rice balls

Aoi liked it too

He had said it many times

He liked to eat another taste

But now he understood

Sister Xi's favorite quote at that time was

but knows the blue of the sky

This is Sister Xi's deepest love for her sister

Xiaochuan is very lucky to be able to love

She loved her sister so much.

Ogawa was outside and wanted to go in.

Ogawa came out with her sister in his arms

Aoi didn't want to be a light bulb

So she ran home by herself

She asked the three of them to drive back

Ogawa said he still wanted to stick to his dream

But this time he also wants to be with Xi

After the two of them said that

The 18-year-old Ogawa had disappeared.

Aoi, who was running wildly on the road

Trying not to cry out

But as a strong wind blew by

She knew that Ogawa had disappeared.

Finally, she couldn't help but cry with a headache

She figured it out

She still had to live with her sister

To continue to live on

To continue to enjoy the blue sky

This article was published by the #author at #Time on the #website name, if in doubt, please contact us.
本文链接：https://www.toomic.com/movie/403.html