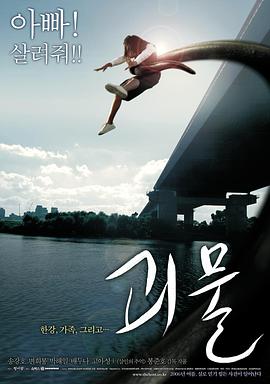 The Americans dumped chemical fertilizer into the Han River

This caused the mutation of the creatures in the river

The Koreans are in trouble.

Today's story is about a monster

In 2002, the American biochemical army was stationed in Korea.

They were doing some unseemly experiments

The professor told his assistant that the reagents were contaminated and could not be used.

Pour them down the drain.

The assistant is Korean and he's a little confused.

The sewer is directly connected to the Han River.

How can you throw a highly toxic chemical reagent directly into it?

But when you work for someone, you have to do what you're told.

He had to pour hundreds of bottles of reagents into the sewer.

found a strange fish in the Han River.

It had a strange and disgusting look, and many legs.

A wave hit and the little monster escaped

A few years later, a single father, Dasheng, opened a kiosk on the Han River.

He opened a kiosk, which was actually owned by his old father.

Dasheng grew up with a bad brain and spent his life in his father's store.

Dasheng's family has two other members, his brother Xiaosheng, who is unemployed

and his sister Junko, a national shooter.

Today is the day of Junko's competition.

Daughter came back early to watch the competition, and Dasheng was serving customers outside.

Suddenly, a strange object appeared on the Han River Bridge.

It was hanging upside down on the bridge.

Everyone wondered what it was.

In a moment, the strange thing jumped into the water by itself.

Dasheng tried to throw a bottle of beer

It was actually swept away by its tail

The crowd was very excited about this dolphin, right?

Everyone threw food, but then threw

No movement in the water, Dasheng turned his head to see

A huge fish-headed monster was walking along the shore.

It looked like it was coming, and everyone exploded.

They started to run in all directions, and Dasheng also ran forward.

Many people panicked and fled to an abandoned container.

Dasheng was a very righteous fool.

He and an American tourist tried to save the people

But the monster was too powerful and they were no match for it.

They couldn't do a single bit of damage

At that moment, his daughter came out to look for her father after watching the game

Dasheng took her hand and ran away, but they tripped halfway.

Holding the hand is not the daughter at all

Dasheng watched as the monster swept his daughter away with its tail.

Then it disappeared into the distance of the Han River, and there was nothing he could do.

That day, the government closed the Han River.

DaeSung and his father were taken out too.

A memorial service for the victims was held on the shore.

DaeSung's family cried in front of their daughter's statue.

As they cried, an officer in a yellow uniform

Holding a loud speaker, he asked which of you had come into direct contact with the monster.

Its blood seems to have splashed on my face

As soon as he said that, dozens of yellow suits appeared from all directions.

They saw Dasheng's family as the source of the infection.

They took Dasheng and his family to the hospital.

Signs of the virus were found on the American tourists who were involved in the rescue.

For the safety of all Korean personnel.

They had to quarantine the virus.

If necessary, all sources of transmission must be eliminated.

Daesung stayed at the hospital and waited for the tests.

In the middle of the night, his cell phone suddenly rang.

When he picked it up, it was his daughter calling.

Her daughter said she was taken to a sewer by a monster.

The phone ran out of battery, and Dasheng rushed to contact the staff.

He asked them to trace the location of the phone, but the military said he was thinking of his daughter.

He was dreaming at night and didn't want to talk to him.

Dasheng's family didn't think so, and his father made an immediate decision.

He made a phone call to the local mob.

Since the government wasn't looking for him, my own granddaughter

I'll go find her myself.

The same day, the old father asked the gang to pick them up.

He also used his coffin money to buy some guns

But the family soon ran into problems

The location provided by their daughter was too vague.

Where should they look? They could only wander around.

At this time the monster was not idle, it was all over the world, catching people and eating them.

This time he brought back a pair of little brothers.

The older brother was already dead when he was captured.

The younger brother was still alive, and Dasheng's daughter decided to take good care of him.

Lead him to live together

The Dasheng family wandered around all day without finding the monster.

They decided to go home and take a break, but by coincidence

The monster came to them. The three men in the family were armed with pistols.

She shot arrows at the monster.

But the family of four didn't do much damage to the monster.

Dasheng, on the other hand, inflicted a fatal wound on his father.

The good son couldn't count and thought he had one more round in his gun.

So he firmly gave the gun to his father

But when the father pulled the trigger

He found that it was an empty gun.

The old man was killed and Dasheng was brought back by the army who found him.

Xiaosheng and Junzi had to split up to find their daughter

After Daesheng was captured, he had to open his diaphragm for surgery.

He also heard a big secret

It turns out there's no such thing as a virus

To keep up appearances, it wasn't the virus that killed people

Now Dasheng, as a close contact, must have died of the disease

DaeSung opened the scoop... in a moment of crisis.

He pulled off a miracle and abducted a female nurse

Escaped from the base

Meanwhile, Sheng found a friend who could locate his phone

What are you doing?

The friends helped him quickly locate his daughter's position

But he also told the police where he was

I hope his sister can grab the baton to save her

After the monster eats a human, the bones are indigestible

It spit the bones into the sewer in one big gulp

But still the monster swallowed it

When Dasheng and Junko found the monster

They said they would use disinfectant to kill the monster, but of course, the safety of Koreans and so on.

Please take care of it yourself

Daesung seized the opportunity when the monster was knocked out.

He dragged his daughter out of his stomach.

But the daughter was already gone, and Daesung's pain was heartbreaking.

But the little boy did not die

At this moment Junko a small universe burst, gunpowder tied to the arrow

The monster's body was doused with soju by a passerby

Junko an arrow went over and set the monster on fire

From then on, Dasheng led the little boy to continue his life

This movie has a strong political satire

If you are interested, you can watch the original film

This article was published by the #author at #Time on the #website name, if in doubt, please contact us.
本文链接：https://www.toomic.com/movie/444.html