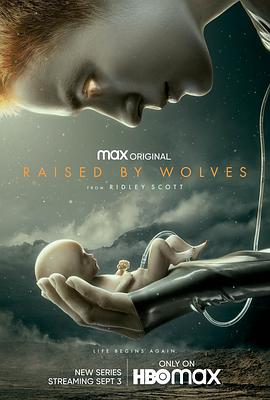 Even Nolan, who is regarded as a god, has to respect him

He made Blade Runner

He made the opening film of the Alien series

He ushered in a whole new era of science fiction films

The master of futuristic fantasy.

Your master is still your master

Now it has just reached the third episode

A certain petal rating has directly soared to 9.1

After watching it, netizens simply and brutally wrote down their comments:

No need to say more, one episode of God

The story takes place in a future world ravaged by war

Humanity is completely divided into two camps because of different beliefs

One of them is the devout, believing in the sun god

They launch an all-out attack on the atheists

They have also created a particularly awesome artificial human

They can hover in the air

With an ear-splitting, mournful scream.

They shoot energy through their eyes

They can instantly turn flesh into blood and water

In the end, the religionists won.

On the verge of destruction

It was no longer fit for survival.

For the continuation of the race and civilization

A thousand chosen followers of the Sun God

But still full of mystery and unknown desolate planet

The surviving atheist forces on Earth are also acting in secret

They send two androids in a shuttle-shaped vehicle

To land on the alien colony first.

Just after arriving on the planet.

They found the skeletons of many giant creatures.

The two androids had no names.

They called each other "Father" and "Mother".

They have a great responsibility.

But also to teach them to become strong atheists

And to create an atheist civilization on the planet.

So the question is.

How do robots raise human offspring?

The mother throws an orange balloon on the ground.

A greenhouse tent in the shape of a vault was erected.

Then she lies naked on the bed

to the mother's body.

The other end is attached to the embryo, and conception begins.

This sci-fi and primitive reproduction operation

After the umbilical cord is cut

the 6 fetuses were removed in turn

That's when the accident happened

Baby number 6 was not breathing at birth

According to the rules

The aborted baby must be decomposed

To provide nourishment for the other five survivors

But this mother was moved by compassion.

A maternal nature that no artificial human should have.

She took the baby in her arms.

The baby was miraculously revived.

The android named him Campion.

This is a special name

After the Bioroid's creator on Earth

Raised by the androids

The child grew up in an absolutely rational environment

In 12 years, five of the children died.

And that's just a small problem

Kham had a change of heart

Every time his companion experienced death

The pain pushed him further into faith

He couldn't help but want to pray

Lately, the two androids have been malfunctioning.

If they were gone

Can was basically dead too.

If he wanted to keep Can alive, he had to change things.

He thought of joining the enemy

After all, he was still a child

He's not set in his ways yet

Sending location signals to the ark on the interstellar voyage

Let those humans who believe in the gods

But the father's plan was discovered by the mother.

This not only completely defeated the previous goal

It would also take away the little Kan, whom she had long considered her flesh and blood.

During the argument, the two androids fought with each other

But the father was clearly no match for the mother

Bioroids have "hearts" too.

Their central processor was made into a black heart.

The mother reached out and took out the father's heart

The other side was instantly paralyzed

The mother went home as if nothing had happened

Kan asked her where her father had gone

Mother lied and said that his functions had been damaged

She had thrown him into the huge pit not far away

But Kan didn't believe her.

He sneaked out that night after his mother's deep sleep

He had to finish his father's unfinished business.

By using his light body

He managed to reach the interior of the ship.

After a few random operations, the ship was activated.

The tail spurted out flames.

Although it did not fly.

Instead, it fell into the bottom of the abyss.

But the ark, miles away, had picked up the signal.

A few of the faithful landed on the planet.

They followed the coordinates and found Kham and his mother.

The mother was very wary of the followers.

She told them to leave.

But the cultists were surprisingly friendly

They just want to fill their stomachs now

After a few people had eaten their fill

They wanted to spend the night here.

In fact, they had already seen that the mother was an artificial person

But they had been pretending to avoid conflict

They remembered the prophet mentioned in the prophecy

was an orphan in the middle of nowhere

Isn't that what they were talking about?

So that night in the tent.

The disciples were discussing how to take him away.

There was an android hidden in the group.

He said that his mother was an outdated robot.

She could be destroyed in a minute.

The next day, while the mother was away.

The disciples began to tempt Kan to come with them

He said that there were children of his age on the ark.

There were animals he had never seen before, etc.

But he didn't want to leave his mother alone.

While he was struggling

His mother arrives just in time.

At first, the mother was at a disadvantage

Inside the house, she was beaten continuously

But suddenly there was another hoarse roar

They had underestimated the mother's power

It turned out that this mother was originally a religious sect

They had created a spirit-evoker

But the atheists caught her.

She was transformed into an android nanny to take care of the children...

The mother spread her arms

The whole person switched to another form

Flying in the air, she chased after the disciples who ran away

The cultist escaped back to the cockpit

But he couldn't start the ship's engines.

The mother had the ability to override the ship's commands.

She flicked her hand across the

The ship is transformed.

Inside the ship, the cultists fired their pistols wildly.

But Mother was unharmed.

Looking at the mother who was closing in on her.

The cultists gave up their resistance.

The mother flew the ship into space.

She disguised herself as the disciples just now

She managed to blend into the ark

The mother destroyed the ark.

She took all the children on board back to the planet.

This time, there were six children in a row.

But the mother went on a killing spree

He began to distrust his mother

He had an emotional crisis

Everything seems to go back to the past

The mission to raise children and expand the population

It was time to start again

But the hidden danger of this strange planet

Some kind of alien reptilian creature

It's a sci-fi version of "The Wolf Cometh".

The wolf is an alien wolf.

They are silvery white.

They pounce on humans with ferocity.

In the face of danger

Mother once again plays the role of guardian

She opened her arms and took to the air

After the threat was removed, the mother warned Kan.

There are many such monsters on this planet.

However, Kan has a crisis of trust in his mother.

He doesn't believe that there are really wolves out there.

He thinks that his mother is trying to control herself

The children who came down from the ark

were raised with faith

They questioned the scientific, rational worldview passed on by their mothers

And they pray to God in secret.

They also secretly "brainwashed" young Can.

that his mother was an emotionless killing machine.

His mind and faith were shaken like never before

And soon after, the same tragedy happened again

The children who came down from the ark gradually became weaker and weaker.

The symptoms were exactly the same as those of their siblings who died one after another before.

Can could no longer stand by and watch death come to him.

He thought his mother was secretly poisoning those children

But it was because

The fruit they ate was radioactive

Those children died before.

It was also because of this.

Little Kan is a special body

So only he is fine

But he didn't know that yet.

His mother left the camp to search the planet for human traces.

Kham knew this was the perfect time to escape

He lured his father into the warehouse.

Then he escaped from the camp with the others

Unbeknownst to him, these children

They all had GPS chips hidden in their bodies.

Therefore, the religious side searched for the children's location

while on the other side

The mother also learned about the little Kan's escape

Children are the future of mankind

In order to hold the future in their own hands

There will be a battle for the future

Beyond the high-energy plot

There are still many mysteries to be solved...

Why are the skeletons of giant beasts buried in the land?

Why are the fruits of the deserted planet radioactive?

Could there have been a higher civilization in this place?

Are the huge pits natural or artificially dug?

Where do they lead?

We do not know these yet

It will be an epic work of great ambition

Every picture is full of ritual

Of course, it also includes straightforward gore and violence

The whole story revolves around "human and androids".

The development of "religion and science"

Through these two topics

A variety of subtle and intense conflicts arise

Struggling with the scales of faith

The original title of the play was "The Wolf

Literally, the man raised by wolves

It's a mythical story about the founding of Rome

The foundling survives on wolf's milk

Grows up and finally avenges the priest

Corresponding to the characters in the play

History and future are intertwined to make more sense

It is not only through the idea of excellence

Broadening our imagination of the future

but also from a macro perspective

This is the real top science fiction work

That's the end of our story for today.

This article was published by the #author at #Time on the #website name, if in doubt, please contact us.
本文链接：https://www.toomic.com/movie/168.html