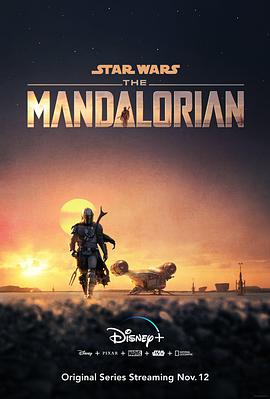 This is a science fiction film that has kept the audience waiting for 50 years.

What is its charm?

Mandalorian from the music

The production of a short 30-minute episode

The cost is more than 15 million

The whole series investment is up to several billion

The picture quality and special effects

It is completely the level of the Star Wars movies

It is not complicated

Everyone can understand it at a glance

And it's this simplicity and purity

That's what makes it so beautiful

Today, I'm going to tell you about

In the last episode, we talked about the Mandalorians.

He encountered a lot of difficulties on the way to rescue him.

But the first time he saw it, he felt compassion.

And the hunter's duty is to complete the task

Although this little northern nose is old

1.1. but still maintains a childish heart

Now Mango is ready to hand him back

In exchange for a high bounty

After Mango parked his beloved airship on the tarmac

He took the little northern nose to the alley again

There were all kinds of races in the alley.

They were all from other planets.

He brought out the Mandalorian blocks he had promised.

There were more than 30 of them.

There is nothing more valuable than these blocks of steel

After the transaction was completed

Little North Nose was slowly pushed into the inner room

Those big black-kissed eyes looked at him trustingly

At this moment, Mango was not half happy

For a cold hunter to say

This is a feeling that has never been felt before

But the old man refused to answer

Hunter status for the union

No need to ask anything else

There is nothing more important than being strong.

Everyone who passed by him was staring at the bucket.

Back then, the Empire swept the entire planet of Mandalore

The Empire swept the entire planet of Mandalore.

Many people died for it.

Now Mango is working for the imperialists for the steel.

It's a disgrace to them.

For them, it's a disgrace.

As long as the steel is returned to his hands

There was nothing to complain about.

The forgers put the steel blocks neatly into the smelting box

He came to the tavern to see the head of the guild, Griff.

The people next to him were stunned

In the crowd's admiring eyes

Mango walked up to Griff

Mango asked how many mission trackers there were.

Griff said that everyone here has one.

But Mann was the only one who completed the mission

Then he started asking for the next mission.

As far as Mango was concerned.

The farther away from the sins he had committed, the better.

After getting the mission disk

Returned to his ship

Seeing the joystick without a handle

A feeling of sorrow came over him

He pondered for a while

Resolutely shut down the engine

Stepped off the ship

Came to the alley

In the garbage pit, he saw the incubator of the little northern nose

I felt a sense of foreboding

Go over to the roof

Turn on the surveillance device

I heard the conversation between the two men in my headset

The meaning is to extract the material at all costs

Then this price may be the little North nose

Mann went to the gate.

Knock on the door

Ripped off the guard robot

The noise attracted two stormtroopers to come out to check

Mango goes around to the back of the house

Blow up the fence.

Walk into the house

Take out the 4th one

Kill the 4th one

Take out the 5th one

The robot on the ceiling is approaching the operating table

A gunshot was shot down

Then push the doctor away

Come out and kill two soldiers

Walk into a spacious hut

He slowly put Little North Nose on the ground

He released the bird whistle weapon on his arm

The four men were instantly hit and fell to the ground

All the trackers were reactivated

The bounty hunters in the guild immediately tracked down

To work together to take the bounty target

That's when Griff got in the way.

Mango jumped onto a cargo lander.

Griff shot through the robot driving the vehicle.

leaving Mango trapped between the street and the tarmac.

with no way in or out.

Paz leads the Mandalorians to support him.

And he didn't have time to ask.

He flew up to the clouds

Mango simply took the little northern nose to his lap

Save him from making trouble

In the interstellar world

There was no interstellar port.

And no industrial centers.

If we are lucky

After landing in the clearing.

Mango wanted to find a place to stay first

Then he would come to pick up the little northern nose

But the little one didn't understand the words

Soon we got out of the forest

To a small town

Anywhere there is a tavern

Mango walked into the tavern

At first glance, he saw a female soldier sitting at the bottom

Just ordered a bone soup for the little green man

Mango came out to look

Just walked to the back door

The female soldier fell from the sky

A fist on the head theft

In the end, only a draw

When they were at a standstill

Little North Nose stood next to them with soup

As the saying goes, if you don't fight, you don't know each other

The picture turns two people in the tavern chatting hot

The task is to protect the representative to suppress the riots

Since she was bored, she became a deserter

When I saw Mango

Thought it was the guild bounty so there was a misunderstanding

Mango was overhauling the airship

At that moment, two local natives came along

They live in a wetland

They live by farming shrimp

But in recent years they have been attacked by marauders

Their lives and property have been lost.

It took them a day to find Mango.

The purpose is to hire Mango to help eliminate the predators

If only to get money S Sheng Mango is not interested

But as long as he could avoid the bounty hunters.

But Mango couldn't get rid of the marauders on his own.

He soon found a female soldier sleeping in the forest.

As soon as they could all hide, they hit it off.

Then, after a long journey.

They soon arrived at the village.

It was a beautiful rural landscape.

People were working without any worries.

Children playing in the fields

This scene is the most beautiful peach garden

They were all curious and gathered around

They were also curious and gathered around

The villagers welcomed the two of them

For Mango, who was used to wandering

At this time does not require high material

Mango, who was overly nervous

Once everything was settled

On the way to the marauder camp.

All the trees along the way were scraped off

It was no ordinary weapon.

"This is a former Imperial all-terrain reconnaissance walker

And equipped with two guns.

The firepower was very powerful.

The village could be flattened in a few minutes.

Mann did not hide it from the villagers.

When he came back, he advised them to find another place to live.

But this farm is the legacy of our ancestors.

They had built up a strong bond.

The villagers were unwilling to give it up.

Since they didn't want to, they had to stay and face the enemy

Mann was impressed by the widow's determined attitude

They agreed to train the villagers in combat skills

The women would learn to shoot to provide long-range support

The men would practice close combat

And build tall fortifications with trees

Leaving only a gap

Dig a deep hole in the pond behind the gap

And fill it with water

If a walker steps into it.

They'll fall into the trap and lose their ability to fight.

After a few days of intensive training everything was in place.

The children and the little northerners hid inside the house.

When it gets dark

Mango and the women were responsible for drawing out the enemy.

They infiltrated the marauders' camp.

They quickly took care of a small number of them.

Then the bombs were planted.

The barracks were instantly blown up.

The foot soldiers were quickly drawn out.

The marauders were led to the gap.

The villagers fought with dozens of marauders on the ground

But the walkers reached the pond but refused to move forward.

They seemed to understand what was going on and fired their guns into the village.

If they don't move forward

If they don't move forward, the walkers can't get into the trap.

We had to find a way to bring them in.

At this point, the girl soldier had a brainstorm.

Get up and leap into the pond

With her back against the pond.

She takes a surprise shot at the driver's window of the walker.

The pilot of the walker tried to shoot back.

But the angle was too low.

Then the walker lost its balance.

It fell into the pond.

Mann gets up and jumps into the cockpit.

He threw the grenade he was holding into the pilot's window.

After a loud bang

Flames erupted from the cockpit.

The other marauders saw the situation and fled.

The farm is also safe

Little North Nose was so cute

The children's laughter was all they could get.

Mango wanted to keep the little snout in this peaceful place.

But it was not to be.

After a few weeks of peace and quiet.

Gunshots were heard in the woods.

Mango quickly went to check it out.

He saw Carla holding a gun.

In front of her was a bounty hunter, face down on the ground.

A tracker was still flashing red.

It seems the reward for Mango's capture has been extended to this area.

Mango had no choice.

He had no choice but to take Little North Nose on the run again.

What's next for them?

This article was published by the #author at #Time on the #website name, if in doubt, please contact us.
本文链接：https://www.toomic.com/movie/169.html