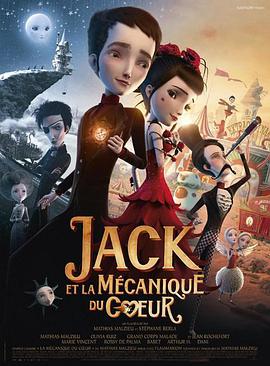 Hello everyone, today I would like to tell you about a

The family can only use an alarm clock as his heart

As soon as his mood swings, it will malfunction story

On this coldest of days

In the snow, a pregnant woman was in a hurry to give birth to her baby

She watched the birds flying in the sky freeze to death

She wanted the baby to stay in her warm belly forever

So that the baby could be protected forever

Fortunately, after the pregnant woman fainted

She was saved by an old woman and returned home

Although the mother and child were safe

However, the grandmother found that the poor baby's heart was frozen

Without emergency heart surgery, the baby would have died immediately.

Then, the grandmother put the baby on the operating table.

She went through everything in the house and compared it with the baby's heart.

Only a heart made of machinery can defy the cold of the world, right?

And so, with the grandmother's tinkering

The baby's frozen heart was removed

In its place, a small alarm clock was made

After replacing the heart with a new one

The baby was named Kit

The grandmother pulls the clockwork

Little Jacky came to life again like a robot

And when the time comes, he knows how to tell the time

After everything was over

The grandmother repeatedly admonished the mother

Not to touch the fragile little heart

Especially not with emotion

If you use your emotions, little Kit will break down

But at night the mother quietly left the little Ajay

Little Kit was left to live with his grandmother

Little Ajay has to wind himself up every day

And must remember not to fluctuate emotionally

If he falls in love with someone else, he will surely die

Every time Little Kit talked to the girl

The grandmother will check the little heart

But little Kit was becoming an adult.

He also wanted to find his other half

He met a girl who sold ice cream

From then on, little Kit's mind was filled with the little girl's shadow

His little heart seemed to be beating for her ever since

But just a few words with the girl

Little Kit's heart smoked and he fainted on the ground

Love will make him lose his life

It was not worth it to do so

Little Kit didn't listen to the granny at all

Not long after, Little Kit finally found the courage to go down the mountain again

He went to the orphanage where the girl grew up

But here he didn't see the girl at all

Instead, he met a black-hearted man with a cruel face

When he saw his rival at the door, he humiliated him

Other people laugh at little Kit is just a robot

Not worthy of a relationship at all

On the day of the girl's 18th birthday

This is a big deal

When the other party's family came to find Little Kit

On the train to Paris

His little heart was scared

It didn't take long for the train to break down again

Until he passed by a circus

Now the little girl has become a singer

The moment he saw her, little Kit's little heart was about to break down again

In order to stay in the circus

Little Kit dressed up as a clown

For having an unusual heart

His arrival was very popular

Seeing that the two were finally getting along better

But the girl said she had only seen each other once

And it was in a rainy square

He didn't even see his face clearly

But before Jie could confess his love

He told the girl that Kit had poked his eye

But the more excited he was, the more he couldn't say anything

His heart was also struck by lightning

Watching the girl being taken away by the black-hearted brother

A Jie's inner pain is immense

The little girl in the middle of the road

Found the key to Ajay's heart was still in her hand

So she rushed back to return the key

But at that time, Jie had dragged his dying body on the train home

The two once again missed the opportunity to confess their love

When Jie returned to the Frozen Castle again

He found that the old lady had died long ago

At the same time, Jie regretted

He also knew that he would not live much longer

He went to the old woman's grave

His heart was filled with guilt

He decided to leave this world quietly here

Just as Jie was losing consciousness

He seemed to see the girl coming towards him

A small alarm clock was put on his heart

This is the last warmth that Jie has in this world

In the girl's last kiss

At this moment, the world stood still

He was the only one crawling towards heaven

And the snowflakes became his ladder to heaven

Some people, in order not to be hurt by the cold

Choose to be a heartless person with a machine heart

While some people can for the sake of feelings

They would rather give their hearts to each other

Even if it means giving up everything

Even if they are bruised and battered

This article was published by the #author at #Time on the #website name, if in doubt, please contact us.
本文链接：https://www.toomic.com/movie/315.html