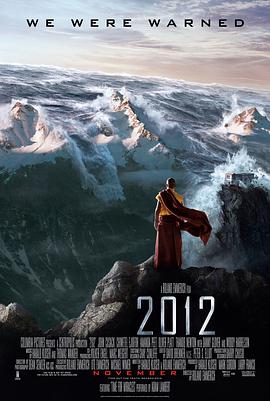 The year 2020 is destined to be an extraordinary year

Originally, the New Year was supposed to symbolize hope

But we seem to have opened Pandora's blind box

All over the world, natural and man-made disasters are coming one after another.

Fires in Australia and locust plagues in Africa

Rising temperatures in the Antarctic and Arctic

In fact, it's all about the butterfly effect of our human activities

The butterfly effect caused by our human activities

The ecological balance is tilting

Nature is sounding the alarm for mankind

As big as the whole universe, as small as a leaf on the earth

A drop of water should be revered

Know that the earth can survive without human beings

But human beings cannot live without the earth

The Earth does not need to be rescued by humans

Humans are saving themselves

This movie was released in 2009 and had a big impact

Although the story in the movie is fictional

But the Mayan prophecy in the movie is true

So after the movie was released worldwide

People's hearts also planted a seed of doom and gloom

Remember on December 21 of that year

How did you spend it? (I was waiting to die)

Geologist Old Black learned from his buddy a

shocking news - our world is going to end

because the Earth was experiencing one of the most powerful

What's worse is that these neutrinos have mutated into

They're heating up the core of the Earth.

When he learned of this, he immediately went back home and reported it to his superiors.

His superiors were still mingling and didn't want to talk to him.

And when Old Black forced him to read the report

The superior finally realized the seriousness of the matter

Told the presidents of other countries

A billion dollar ticket for the mysterious ship goes on sale

Some artworks with high value were also replaced

Fakes were exhibited, while the originals were quietly moved

All these actions were kept extremely secret

So the general public could not get any information at all

But the changes in the environment could not be concealed

To go camping in Yellowstone

When he arrived, he found that a lake that had been there all year

It seems to have been vaporized and suddenly disappeared

They also met a strange man there

He found that the world is changing dramatically

Soon the end of mankind will come.

It marked a location

where the whole world is working together

A ticket sold to one billion

Although Lao Bai is a science fiction writer

But this sudden doomsday is a bit too far-fetched

A few words to the weirdo, and then he turned around and left

The next day, after sending the children back to his ex-wife's house

The next day, after dropping the kids off at my ex-wife's house

Because Old Bai was late, the two children who had been dissatisfied with Old Bai

Before they got on the plane, they said

Only we have the tickets to get on the big ship

We can survive, you can wait to die

When he heard this, he thought about it.

Thinking back to the strange man and the recent frequent earthquakes

Old White made a decision to use his most valuable watch

When he arrived at the place, the earthquake became stronger and stronger

When they arrived at the airport, they found that the pilot was dead

So the ex-wife's current boyfriend, who had only taken a few flying lessons

So he reluctantly became a pilot

As the whole of California fell, they flew

From the plane, the family

The family witnessed the land being swallowed up.

Everything they knew sank to the bottom of the sea.

Not only did they feel a sense of fear

He said the end of the world was coming.

There's a map in Yellowstone from that weird guy.

Find him, maybe there is a chance of survival

Otherwise, we'll have to wait for death wherever we go.

When they found the weirdo.

He was broadcasting a live volcanic eruption from the top of the mountain.

This is the real life of an anchor

And found the map from it

After opening it, he found that the destination was the Tibetan Plateau

But because of the distance, their plane couldn't fly there

Their plane had problems and was trapped here

But he needed a co-pilot

And so they set off again

Although the ex-wife's current boyfriend is a half-wit

The good thing is that this bodyguard is very reliable

The people took off again without any danger

Everything went smoothly, except for a stopover in Hawaii.

Hawaii, where they were supposed to stop, had turned into a sea of fire.

The once beautiful tourist destination was now all gone.

They could only continue to fly towards their destination

On the other hand, the world's elite and the entire nobility are rushing to

But the president decided to stay and tell the people the truth.

The Vatican has also gathered a large number of devotees

They were praying hard to God

But faith didn't save them in the end

The assembled people were crushed to pieces.

On Lao Bai's side, because of the movement of the continental plates.

They soon flew to the Tibetan plateau.

Afterwards, the surviving group happened to come across a group of helicopters

were transporting animals in the direction of Noah's Ark

They thought they would finally be rescued

Even his girlfriend's ticket was not bought

On the other hand, Black and his superiors had a special plane delivered early.

Because this place can accommodate at least 10 people

But that's how the ark was designed

Even if the price is reduced, it is not accessible to ordinary people

It was his Indian friend who called

It turns out that he was the first to find out that the human race is facing extinction, no one to pick up

Such a key person has been forgotten

If he had not discovered this phenomenon and told Old Black

The world may not be able to react so quickly

Before he died, he also told Old Black the latest situation

Old Black quickly re-estimated the arrival time of the flood

It turned out that it came earlier than originally expected

They only had 28 minutes left

Because the top of the third ark they bought collapsed

And the time was too short to use

They were crowded at the boarding gate, and people behind them kept pushing forward

At that moment, Old Bai and his group appeared on the No. 4 ark

It turned out that they met a young monk halfway

His brother was a worker who built the ark

So they followed them through the back door and entered the No. 4 ark

If the future is created in such a cruel way

They would not be able to answer to their children

Especially at a time of life and death.

Humanity should be united.

Under the call of Old Black

The other three arks opened their hatches one after another

The people outside the ark cheered and jumped for joy

Like a tidal wave, they poured into the ark.

Just as Old Bai was about to be crushed, the gears jammed.

Time was running out, and the flood was already over the mountain

The hatch was then ready to close

So Fat Tiger exerted all his strength

He lifted the child over his head and threw him up

And he was left to face the abyss alone

At the same time, a great flood came

But the gears of the hatch of the No. 4 ark were still stuck and could not be closed.

This caused the ark to be swept away.

It was about to crash into the Himalayas ahead

At this time, in order to make up for the trouble his party had caused

But the confused old Bai made the whole boat very anxious

At the critical moment, his son appeared

Then, the hatch closed and the engine started quickly

Although the ark still crashed into the Himalayas

But with the huge thrust of the engine, they retreated

The people on the ark were in a cold sweat, hugging and cheering

Due to the movement of the earth's crust, the African continental plate rose as a whole

As the flood waters slowly recede

The surviving humans will soon be able to set foot on land again.

They are heading to Africa, a newly integrated continent.

Soon to be the new home of mankind

In fact, it's only a matter of time before that day arrives

But if we continue unrepentantly

Of our actions on earth

Everyone has a responsibility, and I hope to share it with you

That's the end of today's story

This article was published by the #author at #Time on the #website name, if in doubt, please contact us.
本文链接：https://www.toomic.com/movie/341.html